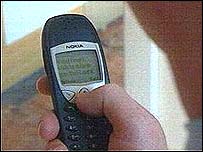 The UN Children’s Fund (UNICEF) is launching its Nigerian campaign because it has the third highest number of people with the disease. Unicef is aiming to take advantage of the surge in mobile phone use in Nigeria over the last six years. The campaign also sees footballer Nwankwo Kanu fronting a TV campaign. The West Bromwich Albion player, who is from Nigeria, will pass on safe-sex advice in the clips.

Nigeria ranks third in the world after India and South Africa. Every day, 1,000 Nigerians contract HIV and another 800 die of Aids and related diseases, many of them children, Unicef said. UN agencies called for anti-retroviral drugs to be given to more pregnant women to avoid a “catastrophic” rise in infections. The current shortage of anti-retroviral drugs has meant an increasing number of children are becoming infected by their mothers at birth, experts said.

Tegegnework Gettu, UN resident coordinator in Nigeria, said: “The problem is very deep in Nigeria, it has a huge implication for the whole continent.”