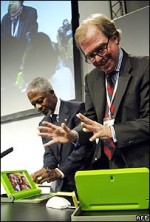 The foldable lime laptop made its debut at the World Summit on the Information Society, which is looking at ways of narrowing the technology gap between rich and poor. Nicknamed the green machine, it can be used as a conventional computer, or an electronic book. A child can control it using a cursor at the back of the machine or a touchpad on the front.

It can also be held and used like a handheld games console and can function as a TV. The green machine was showcased for the first time by MIT’s Nicholas Negroponte at the UN net summit in Tunis. He plans to have millions of machines in production within a year.

The laptops are powered with a wind-up crank, have very low power consumption and will let children interact with each other while learning.

“Children will be able to learn by doing, not just through instruction – they will be able to open up new fronts for their education, particularly peer-to-peer learning,” said Mr Annan.

He added that the initiative was “inspiring“, and held the promise of special and economic development for children in developing countries. Visit BBC for details.